£905 tax cut for people in Carshalton and Wallington

Working people in Carshalton and Wallington will benefit from a £905 income tax cut by 2018 thanks to a flagship Liberal Democrat Budget policy, Tom Brake MP said today. 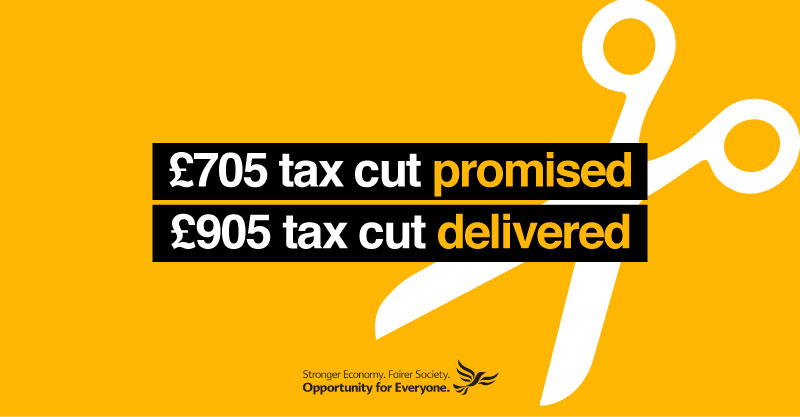 In London these Liberal Democrat measures will lift at least 502,000 out of income tax altogether.

Across Britain 27.2 million people will have benefited from the increases by 2017/18 with 3.7 million lifted out of income tax altogether.

The party’s 2015 manifesto includes measures to go further with a commitment to raise the tax-free to £12,500 by the end of the next parliament.

“This tax cut is the real budget boost for working people and takes even more of the poorest out of income tax altogether.

“The Liberal Democrats are the one party to put tax cuts on the front page of its manifesto and deliver them - helping low and middle income families across Britain.

“This is a Lib Dem policy and has been the most important and effective policy of this Government - reducing the tax bills of millions and millions of ordinary workers.

“Local Tories might try and claim credit but their focus has always been on tax cuts for millionaires. David Cameron also claimed we couldn’t afford to raise the tax-free allowance.

“Only the Liberal Democrats can create opportunity for everyone by building a stronger economy and fairer society.”

“Increasing the amount workers can earn before they start paying income tax is one of the most important announcements in this Budget and is a Liberal Democrat flagship policy - straight from the front page of our manifesto, delivering money into the pockets of millions of workers.

“Today's announcement underlines the sheer scale of the tax cuts delivered by the Liberal Democrats in Government for working households across Britain.

“Today’s announcements will give 27 Million workers a tax cut worth £905 to a typical basic rate taxpayer and lift nearly 4 million out of income tax altogether.

“Delivering income tax cuts for those on low and middle incomes is, was and will be at the heart of the Lib Dem mission to build both a stronger economy and a fairer society - with opportunity for everyone.”