On Thursday, 13 November, Ray and Vi Donovan hosted their annual awards for their charity, the Chris Donovan Trust at the Trinity Centre, in Maldon Road, Wallington. The event was attended by many supporters of the charity, including Tom Brake, MP for Carshalton and Wallington. 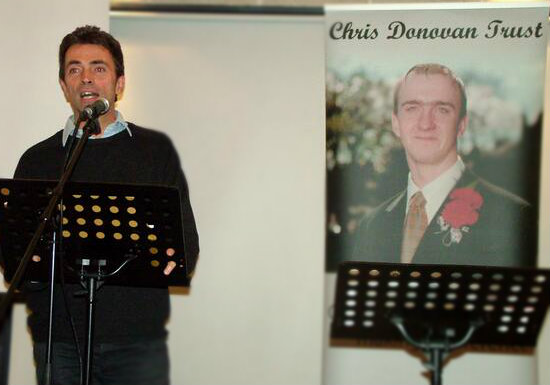 The Chris Donovan Trust is an independent charity driven by the murder of Ray and Vi Donovan’s son, Chris, in May 2001. The main goals of the Chris Donovan Trust are to prevent first time and repeat offending behaviour and to promote partnerships that empower victims to deal with a crime and raise awareness of the benefits of Restorative Justice and other victim programmes.

They accomplish this by visiting schools, youth offending institutions, and prisons to speak about their experiences.

They are the only martial arts school in the world recognised by the Chinese Confucius institute for classroom teaching. The school has also raised over £8000 for cancer research in two weeks.

Commenting, Tom said, “It was an honour to present Keith Monk from Kung Fu School Sutton the Chris Donovan Trust Teaching Life Skills Award. As a one time practitioner of of Kung Fu myself, I know the sport and the school teaches several fundamental life skills like respect, discipline, confidence, and self-control.”

To find out more about the Chris Donovan Trust and Restorative Justice, visit their website at www.chrisdonovantrust.org.