Thank you to the hundreds of you that responded to my cycle survey and also those who attended the summit. I have been very pleased to receive such informative community feedback on this issue, and I just wanted to highlight some of the results below.

Around 400 people responded to the survey, and of that number 396 answered this first key question. As you can see, almost half of our respondents weren’t cyclists, but the majority cycled at least occasionally. 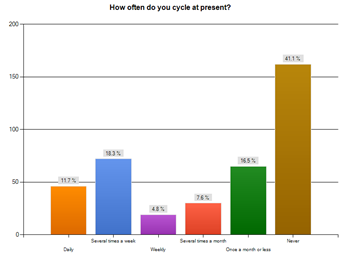 396 people also reported their driving habits, and over 60% drove multiple times a week. It is interested to note that, of the people who drive, a significant majority drive very regularly. By contrast, of the people who cycle, the same proportion cycle weekly or less as cycle regularly. This perhaps reflects how much less economical it is to be an occasional driver verses an occasional cyclist 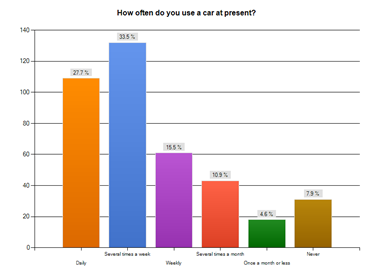 On measures to encourage cycling, the most popular proposal was that of safer cycling routes, while the least popular was to reduce vehicle speeds. This last result probably reflected not just the expected effects of speed reduction on encouraging cycling, but the opportunity costs borne by other road users. 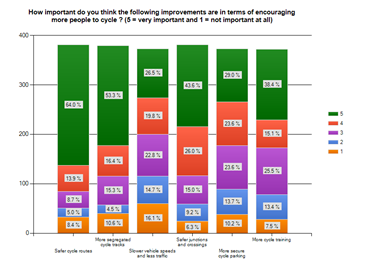 On what we could do locally, again the most popular proposals were to improve the quality of cycle routes on our current roads and in new developments. Around 70% percent of people felt these measures were important or very important to boost cycling. Once again, the impact on motorists was likely in the mind of many for proposals to reduce speed limits or change road priorities, with 30-40% of respondents viewing these as being of little importance. 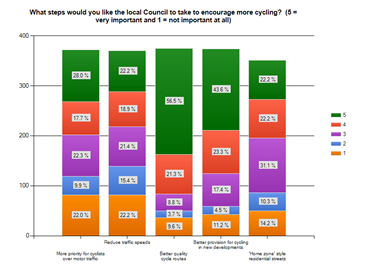 There was more consensus on the national level proposals, with all proposals being viewed as important or very important by 60% of respondents. Educating road users about cycle safety was the most accepted proposal, while the idea of more investment in cycling overall encountered most resistance. 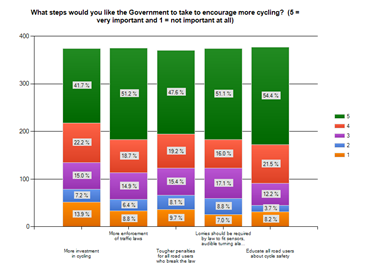 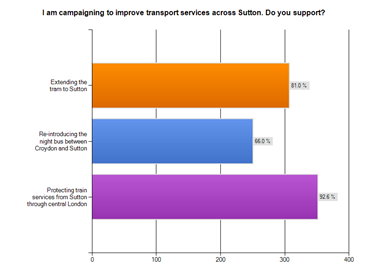