The Leader of the Liberal Democrats and Deputy Prime Minister, Nick Clegg, has today visited Carshalton to personally give his support to the reelection campaign of Tom Brake. Tom took Nick to meet local apprentices from the area to celebrate the rise in jobs and apprenticeships in Carshalton and Wallington since the Lib Dems have been in government. Afterwards, they took the Lib Dem Battle Bus to St Helier Hospital so Nick Clegg could see the hospital and how much work Tom has done to keep the A&E and Maternity Units open in recent years. 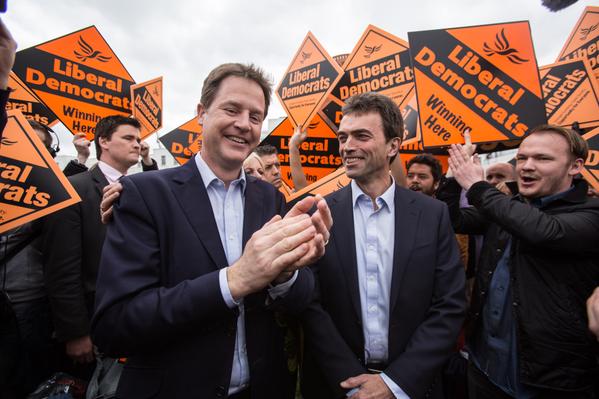 Tom and Nick visited local businesses including the Bakery, a family-run cafe/bakery owned by the Stenning’s Family which has been going for over 40 years, where they chatted with Tom’s apprentice; Callum, an apprentice from the Carshalton Patch, Kieran and an apprentice called Alex who works at The Corner Gallery where Tom and Nick hung a painting by local artist, John Stillman.

The Lib Dem Leader arrived in Carshalton Beeches generating much local interest from residents who came to share their thanks and concerns over issues St Helier’s A&E and NHS funding.

“This was a fantastic opportunity to formally showcase some of Carshalton’s best businesses. I know Nick was impressed!”

"Tom has been campaigning here for a quarter of a century. 25 years.”

"Tom's record in campaigning for St Helier's Hospital, keeping it open, keeping the maternity ward open, keeping accident and emergency going, is second to none."