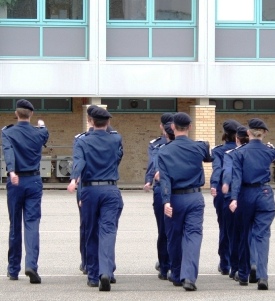 On Thursday, Tom Brake MP visited the volunteer police cadets at the John Fisher School to speak to them about the role of an MP, as well as the local issues that interested the cadets.

The cadets are a uniformed group of diverse young people, some of which want to join the Police, but all of whom want to make a difference. A typical evening meeting usually includes a drill and inspection, a talk or role-play activity, and a team game or PT. On the night Tom visited, some of the cadets were involved in a counter-terrorism exercise.

Commenting on the meeting Tom attended, he said, “It was great to meet with young volunteer police cadets. These young people not only develop personal qualities and skills through structured training, but also enhance relationships between police and local communities.”

Tom answered questions from the cadets on a range of subjects, including what did he think about Boris Johnson and the Home Secretary.

There are currently over 2,500 cadets in London aged between 13-17 years volunteering their services. Sutton Cadets started in September 2005 with 17 Cadets, and it has since grown to the current strength of 90. Sutton Volunteer Cadets meet at Overton Grange School on Tuesdays and a second unit meets at John Fisher School on Thursdays.