Tom Brake today issued a rallying cry for residents to back him as their local champion against the Conservatives’ unfair plans for Britain. He was speaking after a Radio St Helier interview in which the Labour candidate admitted that voting Labour may let the Tory “in through the backdoor". 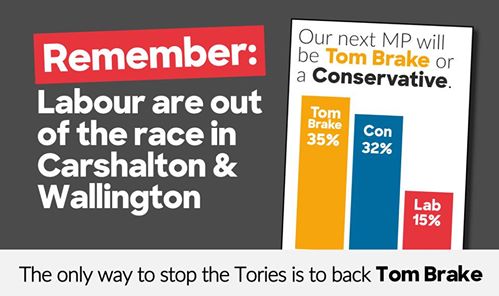 Mr Brake, who has lived and campaigned in the area for 25 years and taken on 150,000 individual issues for local residents as an MP, called on Labour supporters to help him keep the Conservatives out. He pointed out that several Labour Party members have promised him their vote.

In an interview on Radio St Helier this month the labour candidate said:

“This constituency has traditionally gone either Conservative or Liberal Democrat, and lots of people are concerned about voting in a certain way because...they’re concerned that a vote for Labour, may be seen as actually letting the Tory in through the backdoor.”

“It is deeply regrettable that people’s views are not represented proportionately in our electoral system, but the fact is that this is a two-horse race. In Carshalton and Wallington, only a vote for the Liberal Democrats will keep the Conservatives out.

“On the doorstep, people are deeply concerned by the Tories’ dementia tax plans, cuts to school budgets and curbs to people’s pension increases. They want a strong MP to champion local causes and challenge the Government. I am proud of my record over the past two decades, and want to continue fighting for my community.”