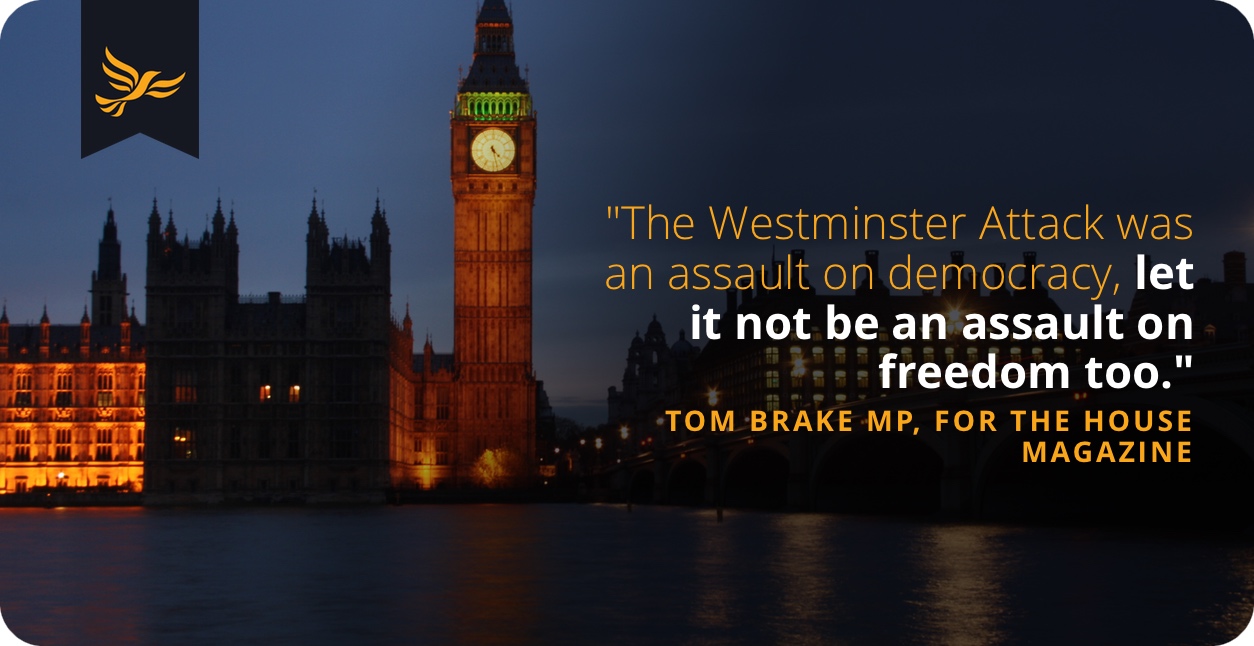 Last week’s attack was barbaric and shocking, though few can say it was wholly unexpected. Morbid though it is, the question was “when” as opposed to “if” following the tragedies of Paris, Brussels, and others.

This sickening attack on the heart of our democracy, at the centre of our capital city was an attempt to silence, divide and terrorise us. It failed.

As I walked into Parliament every morning this week, I was reminded more than ever of how lucky we are in Parliament to have a constant police presence. It is in these times that we are chillingly reminded that they put their lives on the line every day for our security.

What was perhaps more surprising than the attack itself was its brevity and lack of sophistication. Just 82 seconds between start and finish: 82 seconds to end the lives of four innocent people and break the futures of many more. All intelligence suggests the attacker was operating alone, not on any surveillance list, acted on his own twisted ideology, and may not have been in contact with Daesh or any other terrorist organisation.

Whilst the government need to demonstrate it is tough on terrorism, it would be a mistake to rush headlong into ill-thought through emergency measures.

These reactions happen in the wake of terrorist incidents. A call for further surveillance powers. We saw it in the US, following 9/11, in France following the Charlie Hebdo attack and we again see it this week with Amber Rudd’s dangerous call for an end to encryption.

Not only is this a dizzying display of technological misunderstanding, it is a further erosion of our rights and our liberty. It would render everything from online banking to government websites unworkable and would leave us even more vulnerable to hacking and cybercrime. The simple fact is that you cannot have a government backdoor to secure communications, without it also being an attractive entrance for crime.

The bigger issue, of course, is this will not be effective. The 2015 Paris attacks were planned on non-encrypted burner phones, and the attackers were known to the authorities. The issue was the lack of police resources to track potential criminals, not the lack of access to encrypted messages. And drowning our intelligence services in a mountain of irrelevant data is unlikely to help, as the Danes recently discovered.

The Snooper’s Charter was a startling overreach when it was voted through last year, and this would be a horrifying extension of it. Few of us would give the government a key to our house to look through our drawers without a court warrant, and we must be careful to treat our online belongings with the same respect.

Tools which are originally well intentioned can, with a simple change of government, be appropriated as tools to silence free speech, erode our privacy and curtail our freedoms. What was once about protecting us from terrorism or children from abuse, can easily become about tracking those who dissent from government opinion or blocking access to certain media outlets.

If this sounds Orwellian, it should. That is the reality of the slippery slope the government is wilfully guiding us down.

Ultimately Amber Rudd, try as she might, cannot uninvent encryption. She cannot ban her way to a solution here. We must accept the risks of living in a free society and we reduce these risks by supporting our police officers and intelligence agencies with the resources they need, without abandoning cherished civil liberties.

What the attacker sought to do in his rampage was to instil fear and division, erode our democracy, shake confidence in our institutions and rupture our way of life. Our response must be more unity, more democracy, and steadfast humanity in the face of evil. We must always counter hate with love. We will remain open, tolerant and united.