Tom Brake, Member of Parliament for Carshalton and Wallington, after watching the debate on pancreatic cancer has spoken about the need for better awareness, earlier diagnosis and increased research for pancreatic cancer. His call comes on the back of the backbench Parliamentary debate. The debate was called after an e-petition organised by Mrs Maggie Watts – whose husband died from pancreatic cancer back in 2009 – reached the necessary 100,000 signatures to trigger a debate in Parliament. 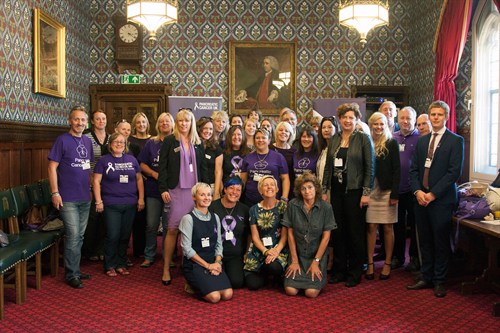 Maggie and more than 50 pancreatic campaigners attended Parliament to listen to the debate and to meet with MPs and others to raise awareness. The debate was also attended by Julie Hesmondhalgh, whose Coronation Street character Hayley Cropper died after battling pancreatic cancer.

Speaking after the debate, Tom said: “The survival rate for those suffering from Pancreatic Cancer is extremely worrying. Something must be done to change this for future pancreatic patients.

I hope that the more we do to raise awareness for this disease, like the debate in Parliament yesterday, the more progress we will see for future sufferers.“

Pancreatic cancer is the fifth biggest cancer killer in the UK. Every day, 24 people are diagnosed with the disease and they currently face a chance of survival of less than 4%, the lowest survival rate of all 21 common cancers. Chronic late diagnosis results in many patients being diagnosed at a point when the cancer has spread to other parts of their body and when curative surgery is no longer an option. Despite being responsible for 5.2% of cancer deaths in the UK, only £5.2 million, representing just 1% of the National Cancer Research Institute’s partner organisations’ 2013 site-specific budgets, was spent on pancreatic cancer research.

“Sadly, mortality rates for pancreatic cancer continue to rise at the same time as the number of deaths from other types of cancer are falling. We need to see more work done to boost awareness of the disease, improve early diagnosis and treatment, and increase the amount of research into pancreatic cancer. The debate in Parliament was detailed, knowledgeable and will definitely help further the pancreatic cancer cause. We are grateful to Tom and all the other MPs who took part in or promoted the debate.”