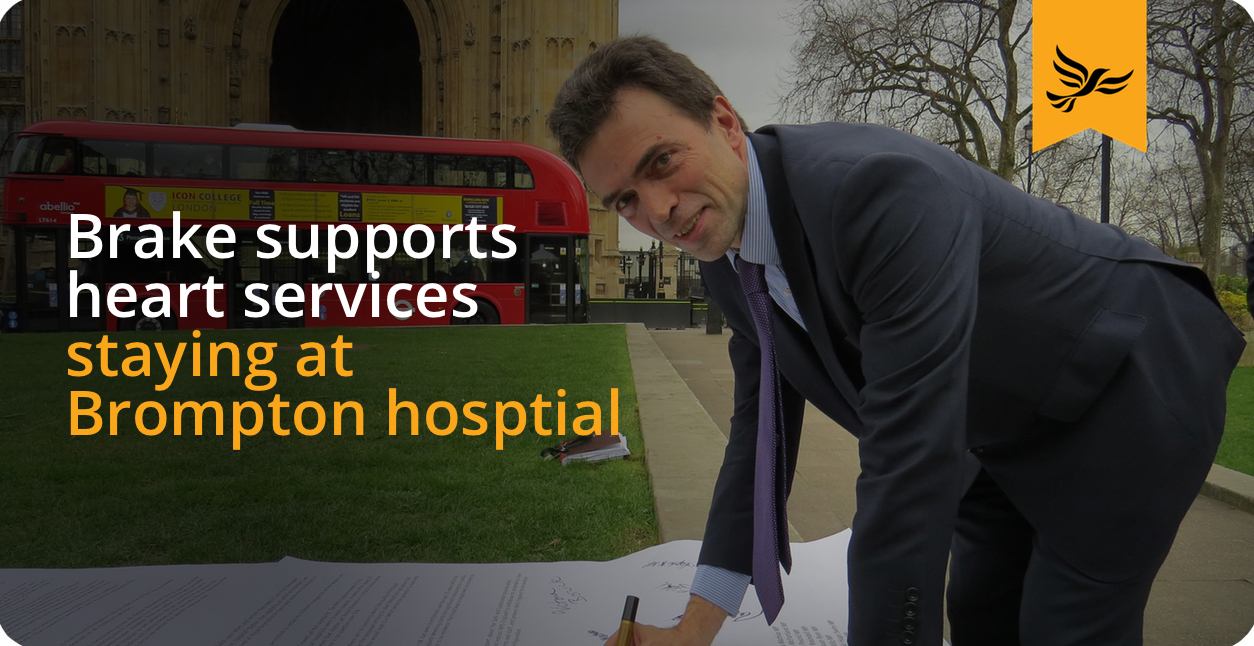 Tom Brake, MP for Carshalton and Wallington, has joined other London and southern MPs from all parties in calling on Jeremy Hunt to halt plans to end congenital heart services at Royal Brompton Hospital.

Tom Brake MP is one of 20 MPs who have jointly signed a letter to the Health Secretary opposing the proposed closure of the UK’s largest congenital heart disease service with over 12,500 patients and amongst the best patient outcomes in the country.

The planned closure is the result of NHS England stating that hospitals providing CHD services must have certain other children’s services on the same site. Royal Brompton meets this standard by working in partnership with neighbouring Chelsea and Westminster Hospital to provide these services.

At a public consultation event on 7 March, NHS England stated that it has no scientific evidence to support the ending of services. NHS England has also been unable to explain how removing services at Royal Brompton Hospital would make things better for patients.

If the plans went ahead, Royal Brompton would be forced to withdraw all CHD services, requiring both child and adult patients to find another hospital to provide their care. The plans would also dismantle Royal Brompton’s world-leading adult CHD research team – responsible for publishing more papers than any other centre in the world – and would force the closure of its children’s intensive care unit.

Without intensive care, the Trust’s paediatric cystic fibrosis and difficult asthma services, both of which are the largest service of their kind in the UK, would also have to close. NHS England do not currently have any plan for dealing with these, and other, wider consequences.

The letter points out that three years ago Jeremy Hunt intervened to halt a similar proposal following a scathing report by an independent panel of experts[1]. The MPs are asking him to do the same again and so end uncertainty for patients and staff and prevent NHS England from wasting much needed resources on a completely unnecessary service reconfiguration.

The MPs conclude their letter by asking the Health Secretary: “Given that commissioners and regulators acknowledge that there are no concerns about the quality of the Royal Brompton’s congenital heart disease services, what problem is the proposal aiming to solve?

“Would you not agree that the closure could only be justified if it is clearly set out how this would lead to a better service for patients? To date NHS England has completely failed to demonstrate this.’’

“Some of my constituents have told me they have benefited greatly from the congenital heart disease (CHD) service at the Royal Brompton and are very worried about the potential closure. We are still waiting for an impact assessment but my concerns are the proposed closure will simply increase pressure on the other CHD services and remove a vital children’s intensive care unit at a time when all hospitals are under bed capacity pressure.

“The Royal Brompton research output in, terms of highly cited papers, is the most prolific of any adult CHD centre in the world and this research saves lives, we need to keep this service.”

“As a doctor, I cannot understand how this plan would result in patients receiving better care. It makes no sense to try and improve care by closing one of the biggest, well-performing services, or by destroying research teams that are leading the way in finding new treatments for the future. To do this without a sound basis in evidence is nothing short of foolhardy.”