Tom Brake MP: The Lib Dems will stand up to arrogant Tories and spineless Labour 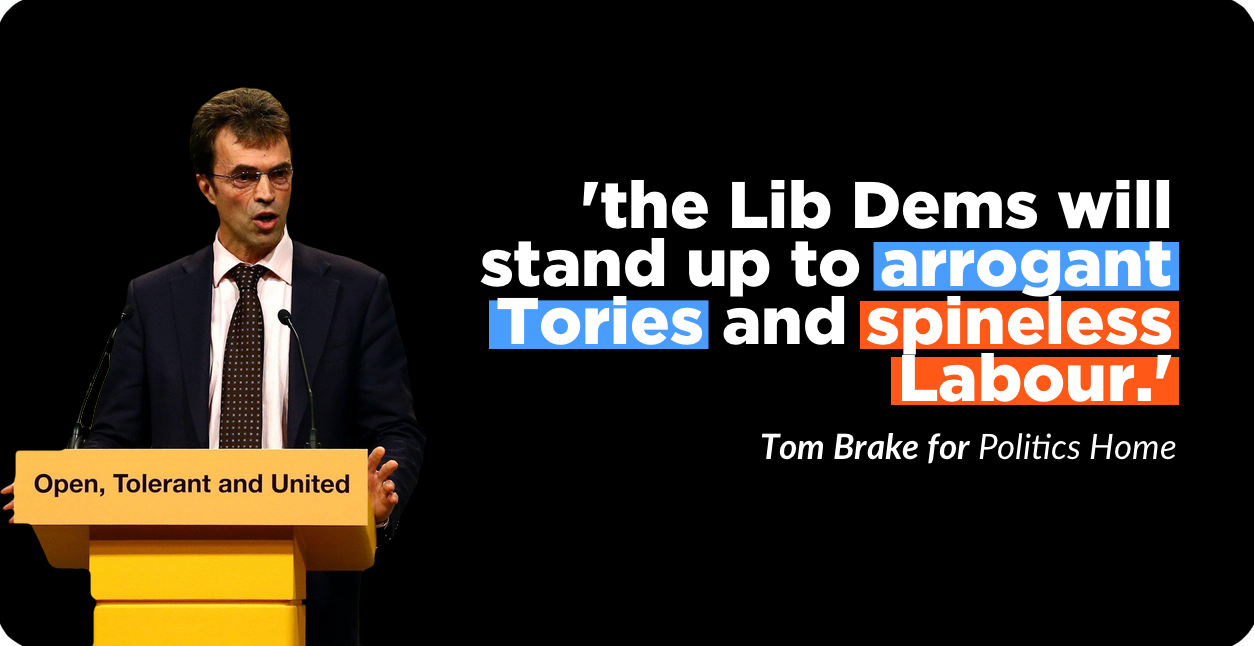 Liberal Democrat MP Tom Brake says that although the battle over Article 50 has been lost, the Brexit tussle has only just begun.

And they have inflicted huge damage on fundamental British values: openness to the world, tolerance of others, unity in the face of global threats.

If you are wondering why Boris Johnson is missing from the list of three Brexiteers, it is because he hasn't been tilting at windmills, he is a windmill.

Like a weather vane, he swivels and jerks in the wind direction most favourable to his political prospects in the Conservative party.

But I can't deny he is a man of principle, it is just a shame that the principle is Boris Johnson first.

The new Brexit elite, the bully boy Brexit establishment he represents, should heed the words of George Santayana, "those who cannot remember the past are condemned to repeat it."

One grandfather served on an aircraft carrier, another in tanks, my father in law in Germany, a devastated, starving Germany immediately after World War 2.

They will have understood why Europe was better together, and how closer European cooperation secured the peace.

But the Brexiteers and their evil puppet masters, the Daily Mail, prevailed - now banned as a source reference in Wikipedia for poor fact checking, sensationalism and flat out fabrication.

The Article 50 bill is now an Act, despite the valiant efforts of Lib Dem peers.

The rights of 3 million EU citizens in the UK, are still in jeopardy, and they are being used as bargaining chips. We pressed but failed to secure EU citizens the right to vote in the EU referendum.  But they do have the right to vote in the Council elections.  I hope they will use their votes effectively.  We will continue to fight for their rights.

The outcome could have been different if Jeremy Corbyn had been on side.

In fairness to Jeremy he can be an effective advocate for some citizens.  The Chagos islanders for instance who have been badly served by the UK and US governments which deprived them of their homeland.

But when it comes to fighting for the overwhelming majority in the UK opposed to hard Brexit, or French citizens in Chelsea, Polish citizens in Southampton and Portuguese citizens in Norfolk, Jeremy Corbyn has been as useful as an ashtray on the motorbike he toured Eastern Europe on with Diane Abbott.

If Article 50 was a skirmish, the Great Repeal bill will be trench warfare.

12,000 pieces of EU legislation to incorporate into UK law before we leave the EU.

The largest legislative process the UK has ever undertaken.

For a government which has form on seeking to avoid parliamentary scrutiny, the temptation will be to cut corners and avoid primary legislation by invoking Henry 8th clauses, to squeeze out the devolved administrations, to quietly dump worker and environmental legislation.

As the Great Repeal Bill and associated bills on immigration, environment and agriculture proceed through the House, the Lib Dems will be there, harrying, challenging, questioning, holding to account a complacent, arrogant Conservative government as a supine, spineless, rudderless Labour party drifts in its wake.

In the words of de Gaulle, we have lost a battle but we have not lost the war. That war has barely begun.

Tom Brake is the Lib Dem Shadow Secretary of State for Foreign and Commonwealth Affairs; Shadow Leader of the House of Commons & Chief Whip. He is the MP for Carshalton and Wallington.