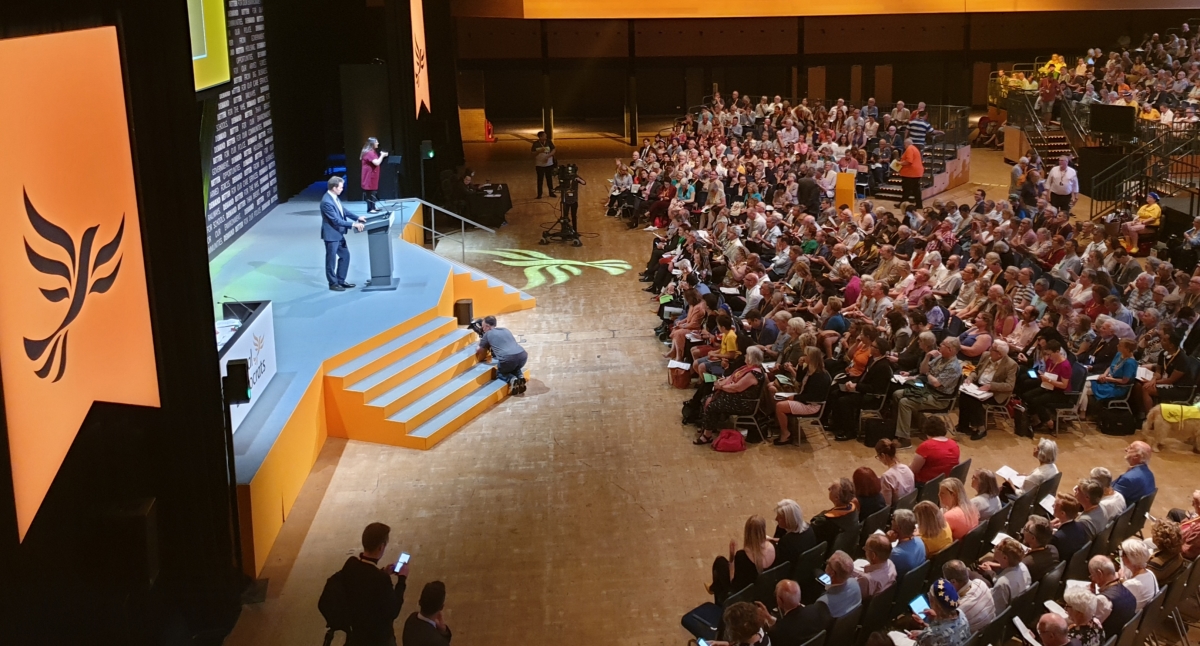 Conference, I’m Tom Brake: 'Doom mongerer' and 'fanatical remainer', leading a coup against Boris Johnson’s government. I’m grateful sometimes that the Daily Express and the Daily Mail do all my PR for me.

Today the Lib Dems will cement our position as the strongest party of remain. We will build on the momentum we have gained and deliver a conclusive end to the almighty mess Conservative party-politics has landed us in.

We have a simple solution:

A Lib Dem Majority Govt will revoke article 50. We will put an end, there and then, to the Brexit nightmare that is dragging the whole country down and tearing us apart.

In other circumstances, our policy, and the focus of cross-party campaigning, remains securing a People’s Vote. I understand the concerns that some have expressed that we are deviating, slightly from our PV stance.

But consider where we are today. Following the European elections, I estimate around 2/3rds of people know precisely where we stand on Brexit. It was just 1 out of 4, two years ago. After our conference and the exposure it will give to the best party leader in the UK and our future Prime Minister, Jo Swinson, and another few weeks campaigning, I will be disappointed if it isn’t 3/4.

Voters will know, in no uncertain terms, that a vote cast for the Lib Dems will be unequivocally for stopping Brexit. And there is only one sure-fire way to achieve that and that is revoking.

A PV, whilst it could provide closure for some, won’t for others, particularly for those whose preferred outcome does not end up on the ballot paper. Revoking is no longer a pipe-dream.

We have gained seven MPs in the last few months shattering Johnson’s majority. Made huge gains in council elections and, in the European Elections, on a clear Stop Brexit manifesto, secured the best results ever.

With the strength of Remain support growing, the Liberal Democrats are within reach of forming a majority government, giving us a firm democratic mandate to Stop Brexit and allowing us to get to grips with our broken politics and build a fairer, greener society for all.

Brexit is not only deeply divisive, it is also a dangerous distraction. It’s prevented us from tackling the issues that really matter, like the future of the NHS, clamping down on knife crime and tackling the climate emergency.

These are all problems that are best addressed in the spirit of cooperation.

Whilst I have to admit that Bob Geldof didn’t make the point brilliantly with his little ships flotilla in the Thames, it is through cooperative action that North Sea Cod is once again sustainable. Supported by borderless scientific research and pooled funding, the UK in Europe is a world leader in green energy and the Institute for Cancer research, in my Borough, is a world-leading institute.

These are the tangible benefits of our EU membership.

Any Brexit means a decade or more of uncertainty, wrangling, and the very real possibility that this government prostrates us before the United States in a lop-sided trade deal. It leaves us weaker, poorer, and less able to address the challenges the UK faces.

We are simply in an untenable situation. I’m not sure what the latest little birdie says, whether it’s Yellowhammer, or Black Swan, but this government has displayed an ostrich-like tendency to bury its head when confronted with inescapable harsh realities.

The leaks show the impact of No Deal. They show that people will have to pay more for medicines, if indeed they are available.

Let me tell you about Mary whom I met canvassing a few evenings ago. She is in her eighties. She showed me the medication she has to take. 9 drugs in all, many imported from the EU. She is very worried about what will happen if the predicted disruption at the border occurs. She is entitled to worry.

Yes, the govt have spent 3 million preparing a fast route into the country. But remember, this is a govt that secured a ferry contract with a company without ferries. The leaks show that food prices will rise, affecting the poorest most, British businesses will suffer, and the peace process in Northern Ireland will be recklessly jeopardised.

Most of all they show that the government is clueless. Jacob Rees-Mogg may be well practised at lying on the benches of the Commons, but the government has finally been forced to come clean, and the arch-Leavers in cabinet have been exposed as the chancers they are.

Billions spent preparing for No Deal, an outcome that would fly in the face of law, billions more to be spent on 'mitigation'.

According to the self-imposed Tory calendar, we are a little over a month away from Brexit, but nobody knows the plan, not least the people most affected.

These are the sunlit uplands sold by the Leave campaign! As we look to the future, though, we must recognise that there is no deal better than continued membership of the EU.

I have mentioned the wealth of opportunities afforded to research, which will be so vital for tackling climate change, and the truth remains that peace and prosperity in Europe has been secured for generations through mutual cooperation. Our living standards, food standards and workers’ rights are all that much stronger because we have worked together in Europe.

The Liberal Democrats are not campaigning for the UK in Europe because we lack optimism and belief in our country.

We are doing so because it is not only the liberal thing to do, ensuring that boundaries do not divide us, but because it is also the deeply patriotic choice.

On a personal level, I know my job would be immeasurably harder, and my life poorer, without both my own multinational team, and without the many friendships I have made over the years as a result of the free movement we all enjoy. The right of EU citizens to remain in the UK must be
upheld, and it has been shameful that so many people, who have contributed so much, have been denied the right to vote on a future that is theirs, as well as ours.

If we go back to the late 1990s, when I was first elected, Boris Johnson was already sowing the seeds for the chaos we see today. The EU was 'regulating the flex of our bananas'. It was 'banning prawn cocktail crisps'.

Sadly, Boris Johnson’s myths and bluster have got him exactly what he has always wanted. But his appetite for high office may already be waning.

6 out of 6 votes lost, found by a court to have misled the Queen, humiliated in PMQs, heckled wherever he goes.

When the present PM throws in the towel, the fourth PM destroyed by the Brexit poison that is slowly killing the Tory party, the people must, and will, have the final say.

Conference I urge you to back this motion:

To stop the confusion,
To stop the reckless electioneering and
To stop the profligate spending on a doomed Brexit project.

Conference, I urge you to Stop Brexit.