Carshalton and Wallington MP Tom Brake has appealed to local residents to help a celebrated war veteran, who served in the 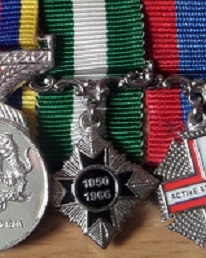 Mr Roger Willes was returning from the Remembrance service in Cheam on Sunday, 10 November when he lost one of the medals he was wearing.

he lost medal was awarded to Mr Willes by the Malaysian Government in recognition of his services and for fighting in the Indonesian-Malaysian Confrontation during 1963-1966. He was one of the last people to receive this military decoration.

Mr Willes also received various decorations for his service in the British Army, including the Malaya and Borneo medals, the British Army of the Rhine (BAOR) and the Diamond Jubilee medals.

Mr Roger Willes said: "I wear the medal every year, when I attend the Remembrance service, on a bar along my other war decorations. This time it must have fallen off the bar at some point."

"The medal means so much more to me than what it is actually worth. I wanted to pass it on to my children. It is irreplaceable. I would be extremely grateful if someone would return it"

Mr Willes thinks his medal went missing as he walked from the Royal British Legion Club house in Mickleham Gardens, Sutton to where his car was parked in Malden Road.

Tom Brake commented:"When it comes to war veterans, we owe a debt we can never fully repay. Medals are testament to their service and a tribute to their bravery and sacrifices made."

"I really hope that someone picked the medal up and that they will return it to Mr Willes."

If anyone has found the me al or has any information, please call Tom Brake MP's office on 0208 255 8155 or email info@tombrake.co.uk it. A reward awaits.