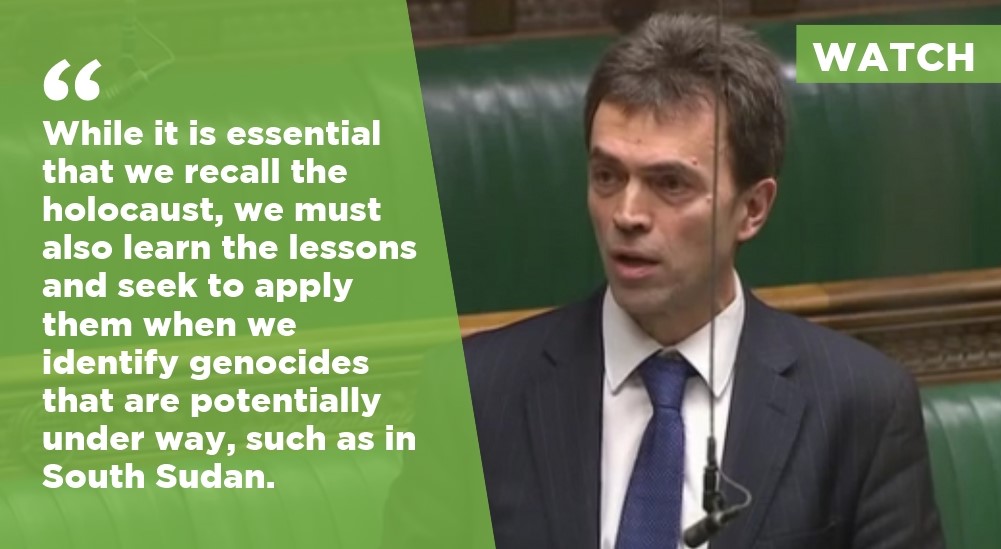 “I start by thanking those who keep the memory of the holocaust alive. There will soon be no living memory of the event, but it will have been passed on to future generations. I particularly thank the Holocaust Educational Trust. Like many Members here, I have visited Auschwitz and Birkenau and what struck me most was the industrial scale and the degree of planning to make the camps as efficient as possible. I also thank the Holocaust Memorial Day Trust and Eve Gill, a holocaust survivor whom I have heard speak a couple of times. She speaks at many schools in my area and Surrey more widely. I heard about her ambitions and aspirations as a teenager and then about how they were blown apart by the holocaust and that had a real impact on me and on the pupils who listened to her.

“We live in a troubled world, and extremism and nationalism are on the march. With ISIS, Le Pen, Geert Wilders, the AfD and Putin, this is an easier environment in which to whip up hatred of people of different faiths—Jews, Ahmadi Muslims or Christians—races or sexualities, such as the gays in Russia. We should not think that the UK is immune from that—other Members quoted a rise in hate crime of 40% over the past three years. It is, therefore, essential to recall the holocaust each year. We do that not only out of respect for its victims and those of subsequent genocides, but to debunk holocaust deniers, to which the right hon. Member for Brentwood and Ongar (Sir Eric Pickles) referred in his remarks. Such people have had an easy outlet for their bile since the explosion in social media. We also do it to increase the chances that we detect future genocides before they occur. That is our greatest challenge because we have seen genocides since the holocaust in Bosnia, Rwanda and other countries.

“I will finish by mentioning South Sudan. There is evidence from the chair of the Commission on Human Rights in South Sudan that a genocide is underway and that a steady process of ethnic cleansing is ongoing in several areas, with killing, abduction, rape, looting and the burning of homes. Millions of people have been displaced by civil war, different groups are being dehumanised, and a large humanitarian crisis is ongoing due to a lack of food. While it is essential that we recall the holocaust and that significant events take place, we must also learn the lessons and seek to apply them when we identify genocides that are potentially under way, such as in South Sudan. In addition to officially recognising the holocaust, I hope that the Government will take action on the situation in South Sudan."

To mark Holocaust Memorial Day on Friday 27th January, Tom visited Sutton Grammar School where students and young people from schools across the borough explored the theme How Can Life Go On? The theme alluded to trauma and loss and encouraged audience members to think about the impact of loss and the difficulty of coming to terms with the past. Tom was honoured to attend the event alongside Mrs Annick Lever, a survivor of the holocaust.